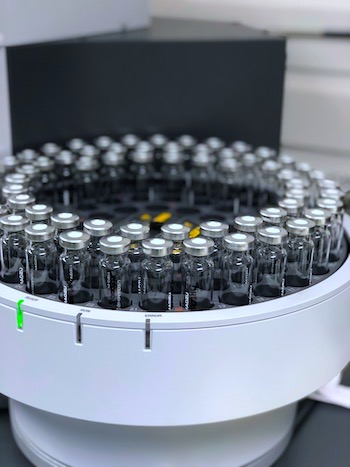 More cannabis growers and suppliers are using plant growth regulators (PGR), sometimes even unknowingly. PGRs are considered controversial, due to the chemical ingredients found in some brands. For medical marijuana users, this has led to concerns over the purity of cannabis products that contain PGRs. To accurately determine the safety of your medical marijuana, submit a cannabis sampling to Modern Canna for plant growth regulator testing. We use standardized lab protocols to measure the concentration and breakdown of PGRs in cannabis, and to determine if the sample is safe for human consumption.

What Are Plant Growth Regulators?

Plant growth regulators are chemical growth products used for promoting robust plant harvesting. Growers having increasingly resorted to PGRs, due to their ability to produce the desired short, stocky cannabis plants cultivated indoors. Short compact plants are more commercially efficient because they are more balanced in a small pot. Short stems are also less likely to be broken during shipping.

Common ingredients in growth regulators include ancymidol, ethephon, and chlormequat chloride, all of which suppress the growth hormone gibberellin, which is known to stimulate the growth of lengthy plant stems. In addition, PGRs also increase plant resistance to fungus.

While PGRs do typically contain some organic ingredients, most also contain supplementary ingredients that are synthetic.

There have been concerns about both the safety and product quality of cannabis containing plant growth regulators. Consumers have noted that marijuana products containing PGR have an inferior flavor. Growers, meanwhile, have noticed inferior visual appearances.

There are also safety concerns. Some PGRs are found to have the ingredients daminozide and paclobutrazol, which are detected in many brand-name cannabis fertilizers. These chemicals have not been approved by any federal regulatory bodies for use on plants intended for human consumption. Daminozide has been designated by the EPA as a probable human carcinogen. It is also banned for use on all food crops. Likewise, paclobutrazol was listed as a probable toxin, after rat studies linked the chemical to liver damage.

The safety concerns outlined above are precisely why cannabis growers need to determine whether a PGR is present in a sample, and if so, whether the ingredients include the aforementioned carcinogens. PGR testing is especially important for producers that market their products as organic.

Some of the other synthetic chemicals we test for include: cyfluthrin, bifenthrin, imazalil, myclobutanil, trifloxystrobin, and spiromesifen. We also test for compounds that are substantially similar, with only small deviations. Florida Governor Rick Scott signed legislation in July 2016 making it more difficult for PGR, pesticide, and herbicide makers to make small chemical changes to banned substances and pass them off as a different chemical. Our testing also detects for such substances.

Modern Canna tests for plant growth hormones and regulators as part of its cannabis purity testing. Our plant growth hormone testing detects traces of PGRs, as well as microbiological contaminants, heavy metals, and residual solvents. We analyze for any compounds that may render the product inorganic or impure.

Traces of PGR in of itself doesn’t automatically mean the purity of your product is compromised. From there, we will determine the chemical ingredient breakdown for traces of substances banned by federal and Florida state regulatory entities.

Marijuana users depend on growers, who in turn depend on cannabis fertilizer suppliers for the healthy cultivation of their crops. We recommend that cannabis fertilizer producers submit samples for testing to ensure it does not contain traces of known toxins and endocrine disruptors proven harmful to humans.

Modern Canna analyzes all types of fertilizers, including organic, natural, and hydroponic-based varieties. If you list your product as only containing specific ingredients, then send us a sample so we can provide verification. This not only ensures consumer trust, but from a regulatory standpoint, this also ensures compliance with state and federal governing bodies. State compliance is especially important, since regulations differ across states. If you’re a fertilizer supplier outside Florida, then you need to be sure your product meets Florida guidelines if you’re supplying to Florida growers.

The responsibility falls on both cannabis growers and suppliers to ensure the quality of the final product. Modern Canna will determine precisely what is in your product and in what concentrations. Whether you are a cultivator, distributor or dispenser, rely on our state-of-the-art facilities for your plant growth regulator testing needs, and make sure you have an accurate profile of your product.